In the early 1960s Thiokol Chemical Corporation, Inc. while pursuing its quest to build solid propellant rocket motors for NASA chose Camden County as the best site for the rocket program. Camden County was selected over 60 other locations because of its available labor supply, proximity to Cape Canaveral, immediate deep water access, community attitude, and several other appealing attributes. They acquired 7,400 acres of land at Horse Pen Bluff to build a 36 building complex with a huge rocket testing pit. In 1965 Thiokol test fired the world’s most powerful rocket at the site. Despite its success, the rocket motor production was stopped when the space program budget was curtailed. The company continued other production on the site.

Thiokol was committed to its employees and this community. Their workforce had grown from its initial count of 35. They had to reinvent themselves and find other uses for the facility. Thiokol was already producing pesticides in parts of the plant. The isolation of the plant and its layout with small buildings somewhat separated made it ideal for munitions production. They began the production of the CS-2 gas, 81mm, and 40mm for our military. In 1969 Thiokol was awarded a U. S. Army contract for the production of 758,000 trip flares. Their workforce grew to 600 employees working three shifts in a 24-hour period.

During the Vietnam War, these civilian workers manufactured the ammunition and trip flares for our military fighting an enemy in a foreign land in the name of “We the People of the United States of America.” They fulfilled this nation’s solemn duty and sacred obligation to support our troops. Twenty-Nine of them perished and fifty or more were injured in an explosion at the plant on February 3, 1971. The courageous response to this disaster by their fellow co-workers, fire fighters, military and civilian medical personnel, law enforcement, and private citizens across the southeastern region was historical. This was the worst disaster in the history of Southeastern Georgia.

The lives of these workers exemplify the pure essence of the American Spirit {Pride, Dedication, Resilience, and Selfless Commitment}. Prior to the explosion, the workers endured hazardous work conditions, numerous flash 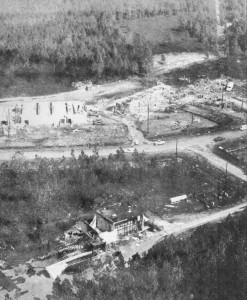 fires, and evacuations daily. Yet, each time an all clear was issued they returned to their work stations and continued the task. Building M-132 was totally destroyed and three other buildings were heavily damaged in the explosion. Even after all of the destruction, pain, and sorrow the workers salvaged what they could and continued manufacturing ammunition in the remaining seven buildings. They rebuilt the buildings destroyed in the devastation within a year after the explosion. When the injured workers recovered, those that were not permanently disabled returned to work manufacturing the ammunition until the end of the war. The Thiokol Plant Workers kept America’s promise to our Military. We propose to build a monument, education center, and a museum in their honor.